by Callum and Gavin


On arrival to Edinburgh airport we were all in high spirits. None of us were tired, cold, hot or missing a boarding pass - yet. We handed in all luggage with no problems and said out final goodbyes to all family members who came to say goodbye. After checking in, we got food and drink and sat down for (sorta) lunch. After our flight was ready for boarding we made our way to the gate, with only one problem. GAVIN lost his boarding pass! (Definitely did not become an inside joke) Thanks to the nice lady at check in he still got on. Some say the boarding pass still haunts those stupid enough to lose their own.


Landing at London Heathrow we collected all our baggage and took two escalators and a train just to get to baggage check-in for the second time. Taking surprisingly less time than expected we got through and into the terminal where we all were hungry and getting tired. All was going so well until after eating out Callum went on the hunt for a cheese and ham toasty (which most certainly did not end up making us run to make up for a 15 min delay)


Sitting in the large South African Airways flight we got comfy and set in for the long long flight. The whole back of the plane was full of Classroom for Malawi volunteers and us. We had two meals and complimentary drinks. We also had a personal screen where we could watch films, play games and track our flight and got a great view of the sun rise.


Finally, we made our way off the plane all tired but fine in Johannesburg. Before we got through to the next terminal, Callum realized he still had the toastie in his bag. We made him eat it in the line before going through security. Before we got on the next flight we met up with the 3rd Kilsyth BB who were also going to Malawi with Classroom for Malawi. On our last flight we got our second breakfast. When we landed in Malawi we felt the warmth of the sun despite it being winter over here. 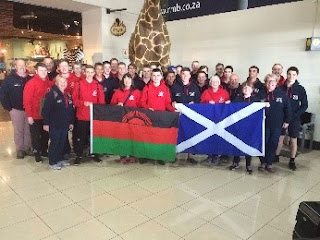 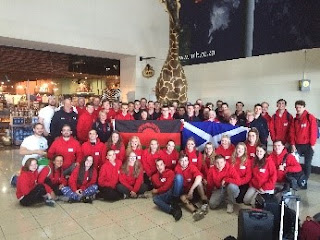 Getting our visa took a while, made worse by the hot room and only one token fan but all our lagge had arrived or so we thought. Mr Anderson was last through customs and couldn’t find his hand luggage but it ended up being in the trailer all the time.


We got into the buses and picked up some snacks in Blantyre before heading down south to Likhubula. Mount Mulange is massive and very beautiful. Our lodge is right at the foot of the mountain and is great. We have 2 dorms and there is another group of folk here from Belfast. The food is brilliant. We had chicken and rice before heading to bed after a long day of travelling. 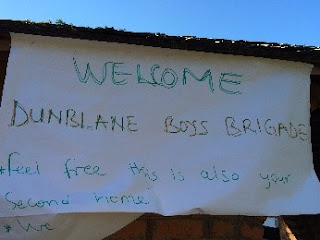