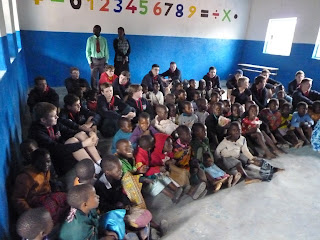 Today we left the Likhubula area after a wonderful and inspiring time working on the classrooms in both Nansato and Pasani. We started off by getting the rest of our luggage on the buses and sitting down for our last breakfast at Likhubula house, but before that happened couple of us made a final trip down to the carvers to get some cracking deals and the trek back up was an absolute mission especially at half past six in the morning still in our pajamas. It was a mad rush to get all the beds striped and getting breakfast before leaving at half past seven. It was our last time having to put up with that bumpy road to Pasani which some of us will probably not remember because they were half asleep. 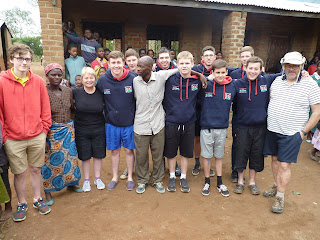 We got to Pasani and the kids were still as excited to see us as the first day we arrived at the school a week and a half ago. It was amazing when we saw some of the kids using the classrooms so we decide to go sit down with them and do one last ‘If your happy and you know it’. We still got the same response after doing it several times. All the people that worked at Pasani got a photo with the head builder and his wife and then we gave him some of our clothes for the builders to share between them. It was a very sad and emotional goodbye for most of us especially when we made connections with some individuals. It felt like we were leaving good friends behind to fend for themselves.

Then we headed back towards Blantyre to begin our journey to Mvuu camp with a few stops along the way. With music playing and many falling asleep after the tough week or so we made our way through the many villages buzzing with people going about their daily business in the markets or working in the fields with many carrying crazy things either on their heads or the back of their bikes. We got to the hostel in Blantyre that we are staying in on the last night to drop of the two trailers filled with our big luggage so that we could drive that wee bit faster and also make it easier to travel along some of the bumper roads later on. 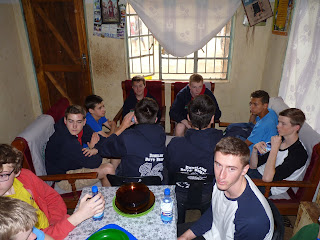 After the quick stop we again got on the road and headed to another school where the Andersons knows the headmaster. Here we had a nice lunch in the headteacher’s front room (24 of us crammed into a wee space) before seeing what their school looked like and the state that it was in. It felt weird to go there and have lunch and also to play another game of football but not to help out with the classrooms. There were a lot of classrooms where the floors were full of potholes and the windows were all the rubbish concrete ones that make the classroom dark. It made us remember how horrible our classrooms were and reminded us of what a difference we made to Nansato and Pasani. During lunch, we were asking the Headteacher about the Play Pump that was at the entrance to the school. He said that the pump has been broken for a long time so all the water that the school uses has to be carried in from a fair distance. This includes all the water required for the Mary’s Meals kitchen. The Headteacher said that it was only going to cost £135 to fix so it was a no-brainer for us all to have a whip round so they could get the pump fixed. Mr Anderson presented the Headteacher with the money later on so that everyone knew what the money was for. 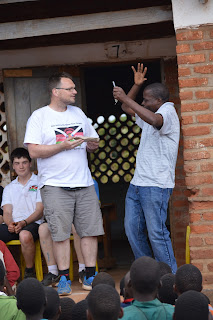 We then had our third and final game of football. The game today was very difficult as we were all tired and the pitch was on a slope so we had to run up hill half the time. Again we played well but suffered a two nil defeat making our playing record Won 0, Drew 1, Lost 2. We then headed back to the buses and headed along the road to Mvuu camp. 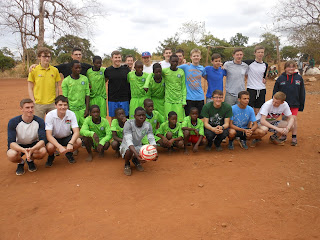 Again we were going through many villages and even past a train track before we seen the sign for Mvoo camp with only 16km to go but this is when we experienced the worst road all trip as it was a dirt track that was so bumpy that most of the times we were not even on our seat and trying to hold onto some of wood carvings and luggage was also very challenging. 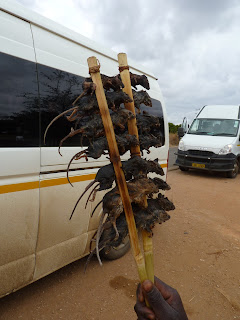 We opened the windows so we were able to say hello to locals and all they said was ‘bottle’ it was like they had been taught to say that instead of hello. We got to the gates of Mvuu camp and when we got through we saw our first animal which was a baboon it was so cool!!! We got to the end of the road and had to get out the mini buses, we also had to say goodbye to Chako and Andrew who were buzzing to get away from us for a couple of nights and we were all emotional. Calum was absolutely crapping it coming across on the boat as we were just informed that the water we were crossing was full of crocodiles and if you fell in you had 15 seconds before you were a meal. 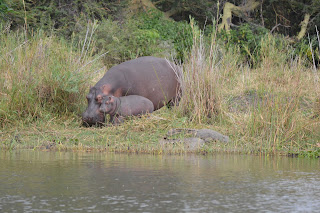 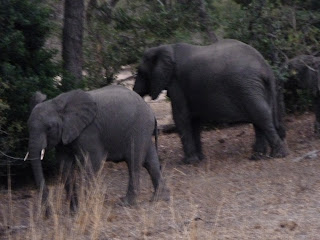 We got a very warm welcome while we decided on are chalet rooms. We headed to the chalets to drop our luggage off and the chalets were out of this world luxury and they even had hot showers and one of the comfiest beds. It was just something else!! We headed back for our taster safari drive and some people were surprised that we weren’t getting anything to eat. We got into the jeeps and headed out for a taster. We saw some elephants, kudu, impala, hippos and baboons. It was so surreal. It started to get dark and we all thought we were all heading back to get some food but it turned out we were getting out the trucks to have a drink and some popcorn. We then headed back looking for nocturnal animals with a big spotlight before having a great 3 course meal. It felt amazing to be so relaxed after the hard week and a half we had just had….
Posted by Unknown at 07:54